At H&R Block Expat Tax Services, we care about more than just filing your expat taxes for you — we strive to give Americans abroad the confidence and guidance they need to make smart overseas financial and tax decisions. We already knew that U.S. expats around the world face unique challenges, especially when it comes to financial choices and taxes — but we wanted to dig in a bit further to see the whole picture.

In early 2021, H&R Block Expat Tax Services surveyed U.S. expats living around the world about their finances, lifestyle, and tax situations. Together, they represent a snapshot of perks and challenges of life as an American abroad, and how that life can affect a U.S. tax return and financial well-being.

What we found is that while expats experience a high quality of life, managing U.S. finances and tax responsibilities can hinder the carefree, adventurous lifestyle they left the States to pursue. Americans abroad have considerable unexpected challenges when it comes to taxes and financial wellness — for example, we found that 76% of surveyed U.S. expats say they’ve been audited by the IRS for incorrectly filing their taxes while working abroad, and 32% of those who said they had to pay fines said they paid more than $500.

The good news is that H&R Block is here to help. See the rest of our insights below, and when you’re ready to get your expat taxes in order Block has your back. Get started with our made-for-expats online tax prep today. 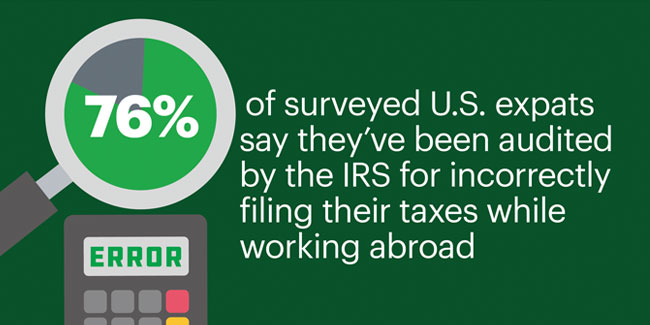 Living in another country certainly has its perks, but it also can have its complications. We found that expats abroad love the adventurous lifestyle but say they are somewhat unprepared for managing their finances — which can hinder enjoying that lifestyle.

COVID–19 impacted expats abroad, just as it did millions of Americans in the U.S.: 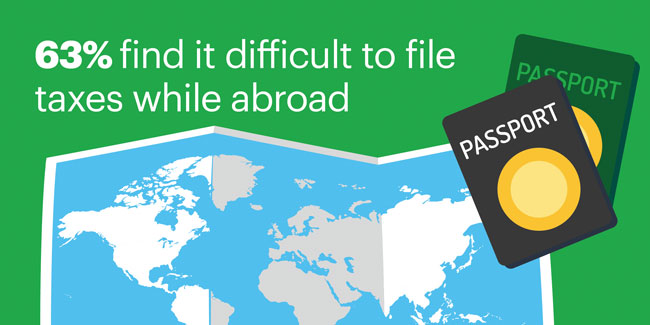 One of the biggest challenges for U.S. citizens abroad is staying compliant with the IRS and the U.S. government. For example, we found that three out of four surveyed U.S. expats say they’ve been audited by the IRS for incorrectly filing their taxes while working abroad, and 32% of those who said they had to pay fines said they paid more than $500.

Need help filing U.S. taxes as an American abroad? We’re here for you each step of the way.

Navigating the alphabet soup of tax forms can be difficult enough for Americans living Stateside and throwing in international tax forms makes it a bit more convoluted. The good news is U.S. citizens abroad have said they benefit from expat-specific tax breaks, and H&R Block has an entire Expat Tax Resource Hub dedicated to helping expats understand their filing options.

Need help? Don’t stress — taxes for expats are complicated, but we’ve got your back. If you’re all set and ready to file with us online, go ahead and start the process with virtual Expat Tax Preparation from H&R Block Expat Tax Services today!

H&R Block commissioned Atomik Research to run an online survey of 503 United States expatriates living abroad. More than three-fourths of the respondents are living in the United Kingdom, Mexico, or Japan. The margin of error fell within +/- 4 percentage points with a confidence interval of 95%. The fieldwork took place between January 15 to 21, 2021. Atomik Research is an independent creative market research agency.