$15.4 billion in tax benefits expire at the end of the year

At the end of this year, four popular tax benefits will expire. That means that taxpayers can claim these tax deductions and tax credits for the last time on their 2016 tax return they file at the start of next year. After that, these provisions that delivered more than $15.4 billion in tax benefits in 2014 will end.

“In the past, there was a bigger sense of urgency to renew or extend the big list of expiring tax benefits because they affected so many taxpayers. But now, the majority of tax benefits that were set to expire every year or two are now permanent,” said Jackie Perlman, principal tax research analyst with The Tax Institute at H&R Block.

With just a week left in 2016, taxpayers may not have a lot of options. According to Perlman, taxpayers generally only have until the end of the year to impact their 2016 eligibility for the expiring tax breaks. 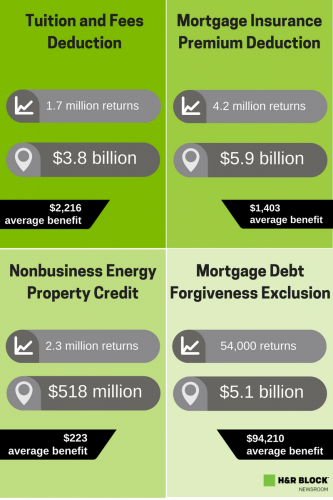 For example, taxpayers planning to make energy-efficient improvements to their home could make sure they do so by the end of 2016 if they haven’t already maxed out that credit. If they wait to make those improvements in 2017, the credit will not be available.

Students or their parents who haven’t maxed out the tuition and fees deduction could pay the first 3 months of 2017 payments early if possible.

Homeowners could pay their December mortgage bill in December, even if the due date is in early January, to be able to include their mortgage insurance premium in their itemized deductions.

Once the new year rolls in, taxpayers will need to look elsewhere for tax benefits and relief for their education expenses and homeowner expenses.

Taxpayers may be able to make some last-minute moves before they shut the books on 2016. But come next week, it will be time to look ahead to tax strategies for a different 2017 landscape with a few tax benefits off the table.