For retirees living abroad, learn more about the tax requirements for expat 401(k) and IRA withdrawals overseas with the tax experts at H&R Block. The experts at H&R Block’s Expat Tax Services are here to help, so below, we’ll give you the rundown of what you should know about retirement account withdrawals for expats overseas.

Yes. If you are an expat enjoying retirement abroad, the U.S. still imposes taxes on your retirement accounts. You can generally assume that taxes on your U.S. retirement accounts will be the same as if you lived Stateside: Traditional 401(k)s and IRAs are tax-deferred accounts, meaning you’ll pay taxes on withdrawals even if you’re overseas. Withdrawals are taxed as income. Roth IRAs are a bit different—once you’ve had the account for 5 years, you may begin withdrawals tax-free, even if you’re abroad.

Tax implications of making an IRA or 401(k) withdrawal overseas

There are two difference scenarios in which you’d make withdrawals from 401(k) or IRA as an expat:

If you choose to withdrawal funds from an IRA or 401(k) before your funds have matured (generally, before you’re 59 ½) you will pay a tax on it—regardless of if you’re living in the U.S. or outside of it.

Second, you may be penalized 10% of the withdrawn amount, subtracting another chunk of your total.

There are exceptions to the 10% penalty, including withdrawals for hardships, disabilities, and other unprecedented situations (including Covid-19 retirement account withdrawal exceptions). Because these exceptions are highly complex, we recommend you speak with a financial advisor before attempting any sort of early 401(k) or IRA withdrawal while overseas.

After you’ve reached the age of 59 ½ you are allowed to begin taking withdrawals from your retirement accounts with no penalties. Under most circumstances, approved overseas withdrawals from a 401(k) or U.S. pensions are still taxed as income, albeit they’re treated as unearned income—meaning you won’t be able to claim them under the Foreign Earned Income Exclusion.

However, there are many tax treaties between the U.S. and other countries. The benefits in these treaties could potentially lower or even eliminate U.S. and/or foreign taxes on an expat’s IRA or 401(k) withdrawal, depending on which country you currently call home.

Some expats think transferring your U.S. 401(k) to an international retirement account is a smart choice, but it could give you more of a headache than peace of mind.

Have more questions about taxes in an expat retirement? Ready to file? Whether you file expat taxes yourself with our online DIY expat tax service designed specifically for U.S. citizens abroad or file with an advisor, H&R Block is here to help. 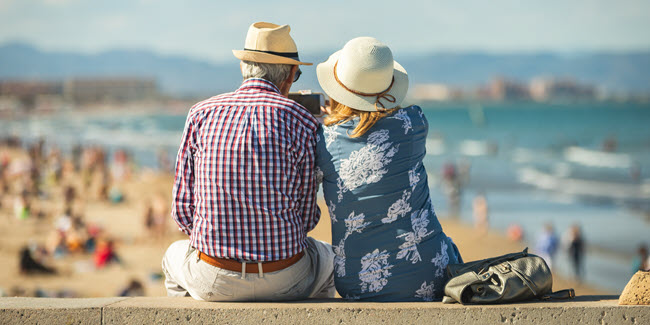