One associate tells of life-changing assistance group provides family Dogs may be man’s best friend, but for one H&R Block associate and his daughter, a service dog donated through a United Way organization has been a lifesaver. Kevin Tinsley, H&R Block franchise regional director, has been directly impacted by the United Way. Tinsley’s 15-year-old daughter, […] 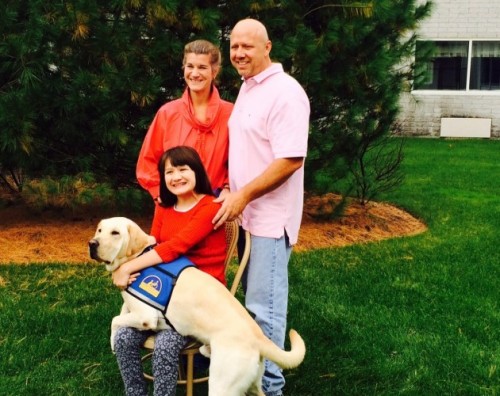 Dogs may be man’s best friend, but for one H&R Block associate and his daughter, a service dog donated through a United Way organization has been a lifesaver.

Kevin Tinsley, H&R Block franchise regional director, has been directly impacted by the United Way. Tinsley’s 15-year-old daughter, Jazmin, was born with cerebral palsy and has restricted mobility with specific needs. Because of a United Way-supported organization, Canine Companions, Jazmin has a service dog named Ohio. “Ohio is a critical part of her life. Canine Companions is a miracle organization,” Tinsley said. “United Way is a crucial part of their funding allowing them to provide us a service dog that costs in excess of $50,000 to breed, raise and train.”

Tinsley is one of almost 80,000 H&R Block associates nationwide who is happy to have supported United Way in record numbers this past year. H&R

Block recently wrapped its 2015 United Way campaign and is pleased to announce it surpassed its goal with a total contribution of $563,000, making it H&R Block’s largest associate contribution to date. H&R Block’s total associate donations over the last four years surpass $1.5 million.

During the two-week “Be a Game Changer” campaign, activities at corporate headquarters and locations across the country included kickoff celebrations, a silent auction, bake sales and raffles. These events provided employees with a chance to contribute to the campaign and learn about the local non-profits the United Way helps every day. With 10,000 locations across the country, H&R Block and its associates embrace the fact that every dollar raised in their respective community stays there.

Each year, the annual United Way campaign is organized by appointed co-chairs at the Kansas City headquarters along with a group of selected champions who encourage employee involvement.

“At H&R Block we have incredible associates who were able to come together and not only meet our goal, but surpassed it by over $25,000,” said Missy Depperschmidt, finance director and 2015 campaign co-chair for H&R Block. “Their generosity and willingness to do the right thing is crucial to the success of our campaign each year. Because of them we are able to continue our support of this worthy organization.”

United Way is engaged in nearly 1,800 communities across more than 40 countries and territories worldwide. They are focused on creating community-based and community-led solutions that strengthen the cornerstones for a good quality of life: education, financial stability and health.