Although it has been said many times that “nothing can be said to be certain, except death and taxes,” a century ago paying income taxes was much different than it is today. And another thing is certain – income tax policy likely will keep changing.

Through 1860, Americans did not pay individual income taxes. Instead, the government collected revenue through excise taxes, like the whiskey tax. The government started collecting income taxes from citizens with at least $800 of annual income starting in 1861 to help fund the Civil War, but repealed the tax a decade later after the war had ended.

When Congress tried to implement another income tax in 1894, the Supreme Court ruled the tax unconstitutional even though it had upheld the income tax during the Civil War. This led to the ratification of the 16th amendment in 1913, allowing for a federal income tax. With just one percent of Americans began paying a one percent tax on their net income, the income tax system used today was born.

While the top tax rate jumped to 77 percent in 1918, most Americans still did not have to pay income taxes or file a tax return through the 1930s. Americans with net income of $3,000 or more had to file a tax return, but fewer than 6 percent met this threshold. Those who were required to file usually had their local IRS office prepare their return by the March 1 filing deadline. Early DIYers could do their own taxes following just one page of instructions. A century later, instructions for form 1040 reached 207 pages.

By the middle of the 20th century, more changes were underfoot. Employers started to withhold taxes from employee wages in 1943. The tax deadline moved to April 15 in 1954. By then, more than three-fourths of Americans had an income tax obligation and they paid $29.5 billion in income taxes, up from $420 million two decades earlier. As more Americans were required to pay income taxes, they couldn’t rely as much on a local IRS office to prepare and file their tax returns. 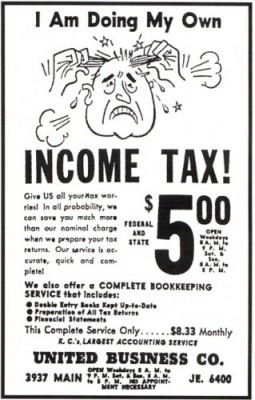 By the early 1960s, taxpayers had to look beyond the IRS to complete their income tax returns. It was also in the 60s that the IRS opened its National Computer Center, although the IRS would not accept electronically filed tax returns until 1986.

While income taxes have changed over the last century, that change has only contributed to another universal truth put so well by Albert Einstein: “The hardest thing in the world to understand is the income tax.”